A day after the good news about Alia Bhatt’s pregnancy went viral, Ranbir Kapoor’s sister Riddhima Kapoor Sahni shared an adorable picture from a celebration in the Kapoor family. The Kapoor clan gathered under one roof on the occasion of Kunal R Kapoor’s birthday. Riddhima posted a memorable picture from the celebration as it had the Kapoor clan in captured in a single frame. 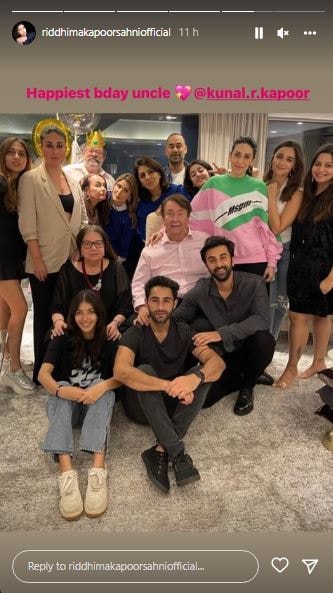 Meanwhile, Alia Bhatt announced her pregnancy with a cute post on social media. Ranbir and Alia tied the knot in April this year after dating for five years. Alia took to Instagram on Monday to announce the arrival of their baby. “Our baby… coming soon,” Alia wrote alongside a picture that shows her lying in a hospital bed and Ranbir sitting next to her. Both of them are glued to the screen that shows the ultrasound of their baby. Alia, who is an animal lover, also shared a photo of a lion and lioness with their cub.

Alia and Ranbir will be sharing the screen space for the first time in Ayan Mukerji’s Brahmastra. Recently talking about his married life, Ranbir said, “Besides films, this year has been big for me due to my wedding. It’s a beautiful thing in my life.” Referring to his famous dialogue in Yeh Jawaani Hai Deewani, Ranbir added, “I used to say, in my movies, that ‘Shaadi is daal chawal for 50 saal till you die. Life mein thoda bahut tangdi kabab, kheema pao, hakka noodle hona chahiye.’ But boss, zindagi ke tajurbe ke baad, daal chawal hi best hai. Mere life mein jo Alia hai, wo daal chawal with tadka hai, achaar hai, kaanda hai, sab kuch hai. So I couldn’t have asked for a better partner in my life.”

Meanwhile, Brahmastra, directed by Ayan Mukerji, will release on September 9. It sees Ranbir appear alongside wife Alia Bhatt for the first time. The two actually began dating after bonding on the film’s sets. The film also stars Amitabh Bachchan, Nagarjuna, and Mouni Roy. The film is the first of a trilogy.

Brahmastra has seen a number of delays over the years. It started production five years ago in 2017 and after delays caused by the coronavirus pandemic and other factors, reshoots finally ended earlier this year as Ranbir and Alia shot for a song in Varanasi right before their wedding. At a reported budget of around ₹300 crores, it is one of the most expensive and ambitious Indian films ever made.