Kangana Ranaut with her makeup artist

After the failure of Dhaakad, all eyes are set on Kangana Ranaut’s upcoming projects such as Tejas and Emergency. And the actress has already begun the preparations for her upcoming projects. Kangana on Thursday gave a glimpse of her working to transform into former Prime Minister Indira Gandhi for the film Emergency. She also introduced Oscar and BAFTA-winning makeup artist David Malinowski, who helped her transform into her character. She shared a couple of photos where David can be seen discussing her looks with her and helping her with the makeup.

Sharing the photos, she wrote, “Welcome to the team Emergency @djmalinowski.” She added, “Pleasure to have academy award winning artist for character transformation in Emergency.” 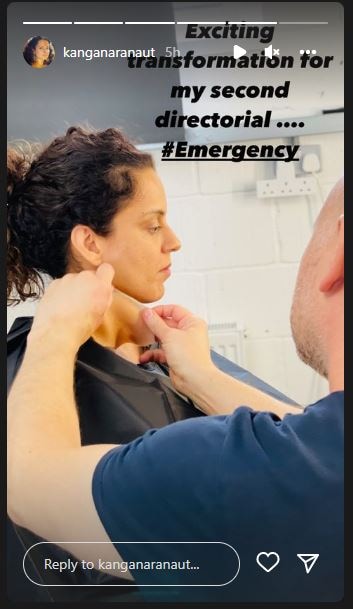 David is the winner of several prestigious awards including the BAFTA award and the Academy Awards. He won the Oscars for Best Makeup and Hairstyling for his work in the film Darkest Hour. He was also a part of the films Wonder Woman 1984, Bohemian Rhapsody, and Fantastic Beasts: The Crimes of Grindelwald.

Meanwhile, Kangana Ranaut’s last theatrical release Dhaakad had a terrible run at the box office. After ending its run at the box office, the Razneesh Ghai’s directorial failed to even earn Rs 3 crore. As per a recent report in Bollywood Hungama, the makers are facing a Rs 78 crore loss, as the estimated making budget of Kangana’s actioner, was Rs 85 crore. The movie reportedly managed to earn a lifetime of Rs 2.58 crore at the box office.