A few days after the rumours of Hindustan Motors Ambassador making a comeback hit the internet, a report now suggests that the iconic HM Contessa muscle car might be relaunched in the Indian market. To substantiate the comeback, the publication has shared details of a trademark, which was initiated in March 2022 to register Contessa name by Hindustan Motors Limited at their Kolkata corporate office. Not only this, Uttam Bose, Director of Hindustan Motors mentioned in an interview that Hindustan Motors has entered in a JV with a Europe-based company to make electric two wheelers, which might later translate to an electric four wheeler as well, giving impetus to Ambassador comeback rumours.

Hindustan Motors was one of the largest carmaker in India before smaller cars like Maruti 800 entered the Indian market. The manufacturer declared suspension of work in 2014 due to low production and demand at both its West Bengal and Maharashtra facilities. 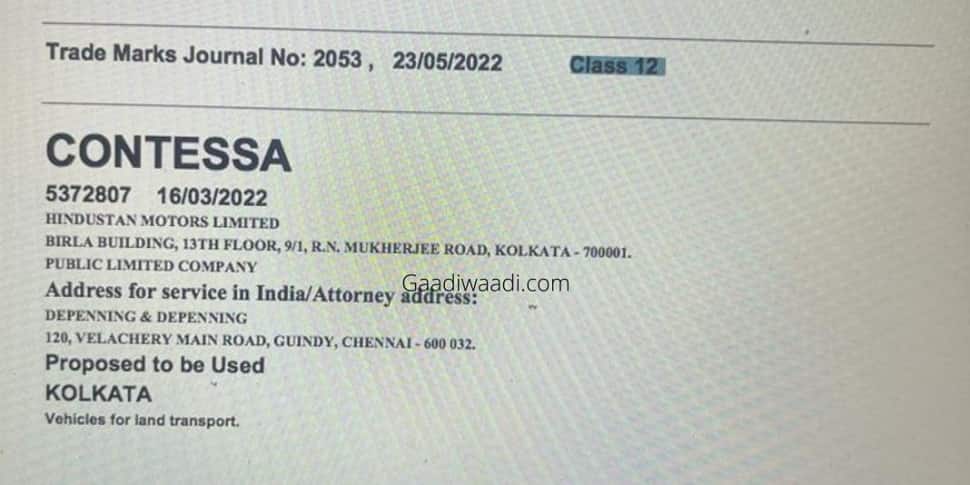 Later, PSA Group signed two joint ventures with the CK Birla group in January 2017 and the Ambassador nameplate was bought for Rs 80 crore from Hindustan Motors. The Hindustan Motors is widely regarded as the country’s first car producer, with legendary models such as the Ambassador and the Contessa, both of which uled the Indian market for a long time.

While the Ambassador was more of a people’s car, giving a comfortable ride quality and solid build quality to owners, the Contessa, was more of a luxury vehicle for its time and was manufactured between 1984 and 2002. The muscle sedan was based on the Vauxhall VX series, and had a cult following, with car modifiers still looking upto the car.

The HM Contessa was powered by a 50 hp 1.5-litre BMC engine and was later adorned with a 1.8-litre petrol engine sourced from Isuzu Motors to add to the performance. What will be the future Contessa will be, nobody is sure, but we can expect an electric Contessa, just like an electric Ambassador!